Why watching sunsets calm, stimulates and recharges your batteries.

I am a sungazer by nature; not just because the sun rules my chart, but because knowing that you can eat sunlight might come as a surprise to many people. So it is good to have the memory jogged as to the reasons why we tend to ignore light as a food source. Like birdwatchers I must fall into that category that has a whiff of geek about it, a sun-watcher with notepad and binoculars. But I confess, I spent a lot of time sunset gazing in India and I feel the benefits even a month afterwards.  Sunsets have been described as a woman dropping her petticoats (Virginia Woolf) or a carnivorous flower (Robert Bolano) or a bloody red rag (Steinbeck) or like a Neopolitan ice cream (Jarod Kintz) and it is all of these images and much more, anything it might suggest to the imagination: an orange, a rose, a cloudburst, a lava lamp; but underlying its role to me is that of magnetic anchor, the centrifuge of our miniscule star system around which we unwittingly orbit.

If you sit and watch a sunset it is like your body clock being slowed down to the true time of the universe. Sensing the slight movement of the earth around the sun (18 miles a second) can make it feel like being in the crew of a spaceship. Day passes into night and night into day, which near the equator is roughly an equal number of hours, so it feels balanced and regular as clockwork. Contemplating or meditating at sunset adds resonance to your anchoring to the particular angle you are positioned in relation to it. It certainly calms the mind, into a deep sense of where and who we are as mere earthlings on earth school.

It also acts like a yogic bunda, lock, tightening the link between you and mother sun, creating a little pocket of force that can be triggered as a memory in times of need when, for example, I am back in London, plunged into grey brooding, wintry skies- pressure ceilings- under which I feel sapped of strength and have to hibernate. I just have to recall a sunset and it takes me back to Samudra beach, or Kovalam, or Patnem, Goa, all those wonderful beaches that face west and are natural auditoriums for the daily drama of sunset and sunrise. Little places of perfection. But any beach, anywhere, or any landscape, even on your balcony, where the sun can be seen to rise or drop over the horizon, are all good enough. Sunsets are the perfect time to sungaze as the damage to your eyes is at a minimum. Not for nothing is it also cocktail hour.


This slowing down can only be good for people who are seriously overworked, overstressed, surviving in big cities and get caught up in all the myths and nonsense about being on time, striving for an ever elusive 'success' and packing a day's work into a limited number of hours.Watching a sunset stops all that and allows a great sense of silence to emerge inside, with its bubbling attendant awe as it feeds more on more on light. The effect is always to still the mind, to de-stress us on a biophysical and psycho-emotional level and fill our light bodies with more light. Even looking at pictures of a sunset is effective, as the same physiology is triggered. But nothing really substitutes for a good long dose of the real thing, if you can find it, when to become a sunset addict can supplant any other pleasure, as, like love, it can be 'all you need.' Another aspect of it is that it is a non-human power, and that is sometimes a relief to focus on something that is not tarnished by human behaviour, political intrigues and pettiness; the sun is simple, pure, yet a fierce and magnificent ball of gas. Not to be toyed with lightly, but to be honoured and revered, as the ancients did.


We hear less and less about solar power these days, even though it is on the rise. I begin to wonder if the harnassing of solar power been overlooked in favour of electricity and nuclear power? Only 4,000,000 homes in the UK will be solar powered by 2018. Perhaps, we need to reinstate solar energy and the safest renewable energy source we have.  Perhaps it is perceived as 'soft' not 'hard' energy, and so sidelined by government budgets. The sun is so primary in its potency as an energy, as to be obvious as plain daylight. The universe is simply unthinkable without it.

The sun is 1.3 million times larger than the earth and this fixes everything around its incredible force of gravity. It controls our weather, our sense of time, and food growth and harvesting times, and although sunlight takes about eight minutes to arrive to earth from the sun, we feel its warming, nourishing energy instantly as a force for good.  In sunlight, we grow, like photo-trophic saplings towards the direction of the unmistakable source. Doctors rightly also advise that to absorb Vitamin D from the sun is good for the bones. We can get some Vitamin D from fish oils and vegetables but the best is from the sun. But that is not all it is.  The enigmatic sun can also underpin mystical feelings of connection with a true self, higher and greater than the self of daily trivialities.


"And the sunset itself
on such waves of ether
That I just can't comprehend
Whether it is the end of the day,
the end of the world,
Or the mystery of mysteries
in me again.”
Anna Akhmatova

Helios, Ra, Apollo, Sol, Surya, or simply, the King: the sun has manifested in various cultures.  Its role is still however, at our core, mysterious and powerful. The sun is rightly feared at midday when only mad dogs and Englishmen go out without hats or umbrellas.This overhead fire curtain can lightly grill your brains, or at least fry the grey matter to an omelette. Better just have a siesta. Sunset watching makes much more sense. If you start about about 3pm, but especially be there the last hour when the sun is at its most majestic. Most temples were built specifically around the sun's position at sunrise or sunset, and encoded an astronomical relationship to the sun and stars such as Sirius.

There are many aspects, and symbolic functions to the sun and in Pagan and Pantheistic beliefs, it was the absolute central force, the sine qua non of survival and the life-death annual cycle. Much of that potency has been forgotten culturally sidelined by religious dogma. The body needs electricity from solar light and this is a kind of nourishing energetic food for our bodies. Looking at the sun can help store this electric power in the body. Even the Bible, Ecclesiastes  11:7 says 'the light is also sweet. It is good to look at the sun."

It is unfortunate then for countries which rarely see the sun and people live subdued, and only half-alive under oppressive-looking clouds, day in day out. Darkness has its own powers to sap the energy, and it is perhaps not strange that the acronym for Seasonal Affective Disorder is the same as for Sudden Arrhythmic Death.

To quote Santos Bonacci, astro-theologist,  sun-gazing, as opposed to mere sunbathing, though this is evidently a form of sungazing,  should be an essential part of your life. " When we stare at the sun in the appropriate time and appropriate manner, the electric energy of the sun which is unlike any other energy  and the electric forces are then channelled through the nervous system." The Hindus also said look at the sun and you will receive all the energy you need.

We feel it happening and the glow of sungazing can last a very long time, recharging our batteries in mid-winter, just when we need restorative power the most. Remembering the sun helps us to be closer to who we really are. It realigns us to the centre of all things. So happy sungazing, whether yours is physical or mental or actively 'eating' the light and storing it for later use. It will help you to be the centre point of your own circle, equidistant from your own circumference, and throw a bit more light around. 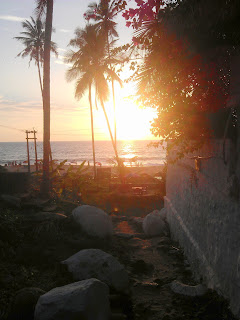 more information on Sungazing, and how people can go without food by gazing at the sun, and some interesting videos about
Sun Gazing